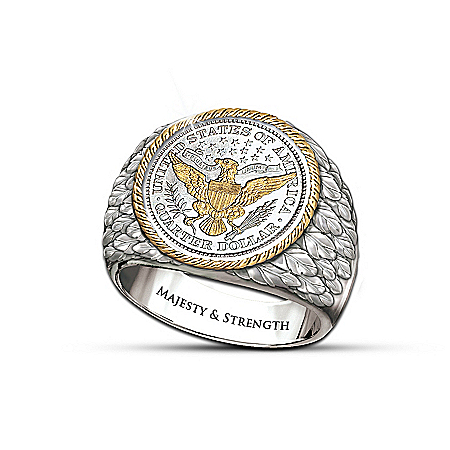 $159 The end of the 19th century was America’s “Gilded Age,” a time when our young nation was set to spread its wings as a major power. New coinage was proposed to reflect our soaring spirit, and the Barber Quarter was the magnificent result. Now this coveted 90% silver coin – minted from 1892-1916 – provides the inspiration and the centerpiece of the Barber Silver Coin Men’s Ring, a fine jewelry design exclusively from The Bradford Exchange Mint. Showcasing the prized coin’s reverse side, of a powerful American eagle, this dramatic ring echoes the heraldic design of the Great Seal of the United States.Superbly handcrafted and gleaming with richly plated 24K gold accents, this bold men’s ring features textured side shanks with intricately-sculpted feathers celebrating the American eagle’s magnificent plumage. A braided-look band encircles the 90% pure silver Barber Quarter center, and engraved inside the ring are the inspiring words “MAJESTY & STRENGTH.” This is your opportunity to own an heirloom-quality salute to the triumph of the American spirit, but DON’T WAIT! Intense demand is expected for this exclusive Barber silver coin men’s ring – order now!