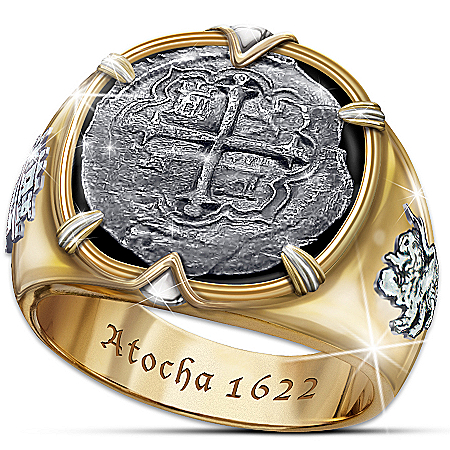 $179.99 Atocha 1622 Shipwreck Men’s Ring Crafted From Sunken 8 Reales Silver Coins – Nearly 400 years ago, raging salt water and howling winds sent the mighty Spanish galleon, the Nuestra Senora de Atocha, to the bottom of the Florida Keys. Her treasure was presumed lost forever until 1985, when her silver was pulled from the depths. Now, own a piece of this legendary ship’s history with the Atocha Shipwreck Ring, created with a portion of centuries-old silver reclaimed from the ship’s sunken 8 Reales silver coins. A fine jewelry design available exclusively from The Bradford Exchange Mint, this Atocha shipwreck men’s ring gleams with 24K gold-plating. The unique centerpiece showcases the coin’s intricate Spanish coat of arms as well as the patina you’d expect from centuries at the bottom of the sea. The lion and castle heraldry of the Crest of Spain grandly flanks each side of this coin ring and the inside of the band is engraved with “Atocha 1622.” Strong demand is anticipated for this bold silver coin ring, so don’t delay. Order now!