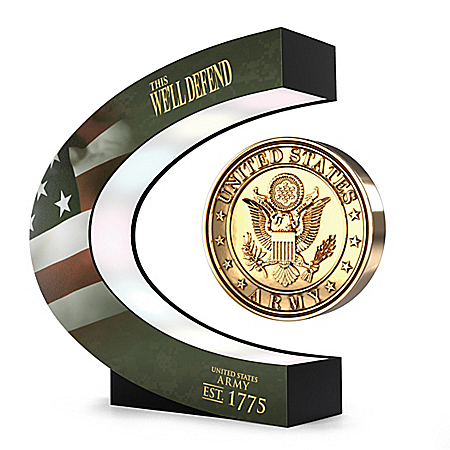 $109.99 Army: A Tribute To Excellence Levitating Tribute Sculpture With LED Illuminated Base – The oldest and largest branch of the United States military, the Army has protected our freedoms since 1775. Precise and ready, the Army is our nation’s first defense on land. Now, honor these soldiers motivated by a dedication to serve and a passion for excellence with this officially licensed Army: A Tribute to Excellence Levitating Tribute Sculpture, exclusively from The Bradford Exchange. Taking center stage in this limited-edition presentation is a precision-crafted Army tribute that floats and spins in mid-air, powered by hidden electro magnets that suspend it within the custom base.Recalling the U.S. Army seal, the gleaming golden tribute boasts intricate, raised-relief details on both sides, including an eagle holding 13 arrows and an olive branch, crowned by the US coat of arms. The specially shaped base is decorated in iconic Army Green and features a vivid image of the Stars and Stripes, the Army motto of “THIS WE’LL DEFEND” and “UNITED STATES ARMY EST. 1775”. Plus, the base is illuminated, casting a reverent glow upon the levitating Army tribute. This unique salute to all soldiers is a proud addition to your home decor, and it makes a thoughtful military gift. Strong demand is expected, so don’t wait. Order now!