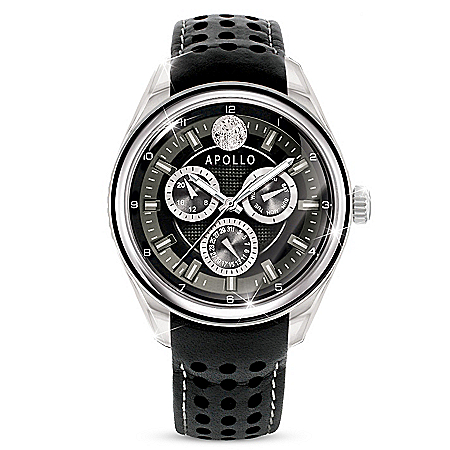 $149.99 Apollo Missions Collector’s Edition Men’s Chronograph Watch With Carbon Fiber Inset – NASA’s Apollo program, which ran from 1961 to 1972, set several human spaceflight milestones, including the first manned mission to go beyond low Earth orbit and the first manned spacecraft to orbit another celestial body. But no event was more important than the one that took place on July 20, 1969, when the crew of Apollo 11 landed humans on the moon for the first time in history. Now you can pay tribute to the 50th Anniversary of mankind’s greatest achievement with a custom timepiece inspired by a timepiece from the historical mission that went to the moon. Introducing the Apollo Missions Collector’s Edition Men’s Watch, a fine jewelry design available only from The Bradford Exchange.This commemorative watch features the Apollo name on the watch face along with the moon at 12 o’clock and a genuine carbon fiber inset. The stainless steel case back is etched with official NASA Apollo logo. This magnificent collector’s edition also features three chronograph sub-dials for day, date and military time, plus an adjustable genuine black leather band. Your chronograph watch arrives in a custom case with a specially prepared commemorative certificate paying tribute to the Apollo missions. Strong demand is expected for this Apollo moon landing-inspired jewelry, so do not delay. Order now!