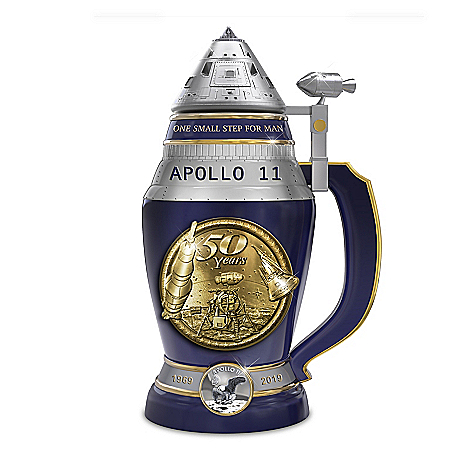 $129.99 Apollo 11 50th Anniversary Heirloom Porcelain Sculpted Masterpiece Stein – 50 years ago the world watched as the heroic crew of Apollo 11 reached the surface of the moon and stepped into history. Now you can celebrate this historic feat with the Apollo 11 50th Anniversary Masterpiece Stein, available in a limited edition of 5,000 exclusively from The Bradford Exchange. This commemorative stein stands at 10 inches tall and is the perfect tribute to such a momentous achievement in humankind. Crafted of richly colored Heirloom Porcelain, it’s filled with special elements that commemorate the mission and the mighty space vessel that took them there and back again.The centerpiece of this Heirloom Porcelain stein is the sculpted medallion celebrating the craft in all its stages that’s embellished with 22K gold and hand-set on the front. A remarkably detailed zinc alloy lid shaped like the lunar command module gleams from the top. The thumb rest is shaped like the command/service module in flight. The famous quote spoken on the moon is featured on the neck, while the mission date and logo grace the base. The reverse features information about the mission, an image of earth from the moon and the NASA logo. It’s a perfect patriotic gift for yourself or someone special, but strong demand is expected – so don’t delay. Order now!