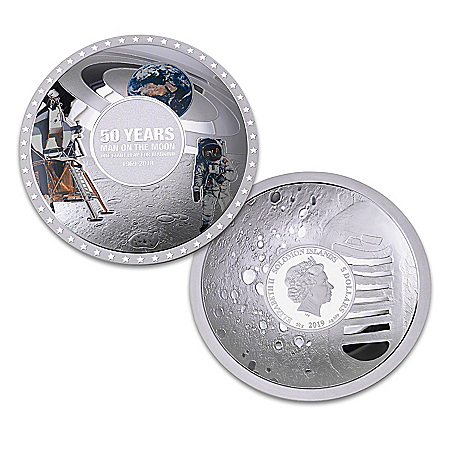 $299 The Apollo 11 50th Anniversary Moon Landing 99.9% Pure Silver Dome-Shaped Coin – On July 20, 1969, when the Apollo 11 mission landed human beings on the moon for the very first time, it was a monumental event in U.S. history. So, it’s only fitting to commemorate the 50th anniversary of this American milestone with a monumental coin: The Apollo 11 50th Anniversary Moon Landing Silver Coin, exclusively from The Bradford Exchange Mint. Available in a strict limited edition of only 750 in North America, this legal tender silver coin brings you a new dimension in commemorative coins, with a rarely-seen dome shape and a full 50 grams of 99.9% pure silver.Measuring a HUGE 70 mm in diameter (over 2-3/4 inches!), this commemorative Apollo 11 coin features a concave obverse showcasing the lunar surface, with a shining, incuse “first step” footprint, along with an effigy of Her Majesty Queen Elizabeth II marking it as legal tender. The convex reverse side is just as impressive, featuring 50 stars for 50 years and the 50 U.S. states, colorful imagery of the moon landing and the earth, and dual dates (1969-2019) to commemorate the mission’s 50th anniversary. Contrasting shining proof and matte bands add extra layers of sophistication. Your Apollo 11 50th anniversary coin arrives in a premium presentation case perfect for display and storage – it makes an impressive patriotic gift too. Intense demand is expected, so don’t miss this must for space fans, history buffs and coin enthusiasts alike. Order now!