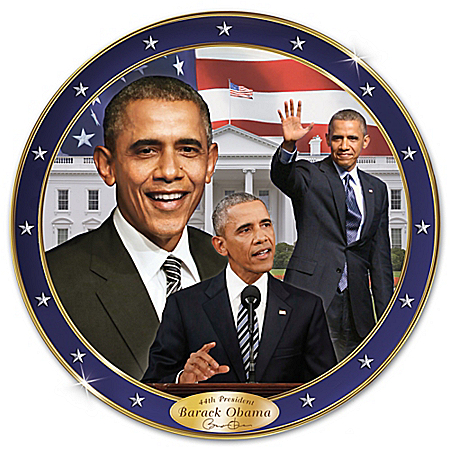 Barack Obama achieved a significant American milestone when he was elected President of the United States on November 4, 2008. Riding on a wave of passion, Obama inspired hope among many people around the world. Now you can honor the power that drove his historic presidency with the American Milestone Commemorative Collector Plate, available in a limited edition exclusively from The Bradford Exchange. This porcelain plate commemorates Barack Obama’s inspiring service to our country.Featuring notable images of Barack Obama during his landmark presidency against a backdrop of the White House and the American flag, this collector plate is crafted in beautiful fine porcelain and boasts gleaming 22K trim around an inlaid border of stars. Celebrating the intelligence, goodwill and passion of American president Barack Obama, this collector plate is sure to elicit intense demand from history buffs and collectors alike. Don’t miss your chance to own a piece of American history. Order now! $49.99 USD