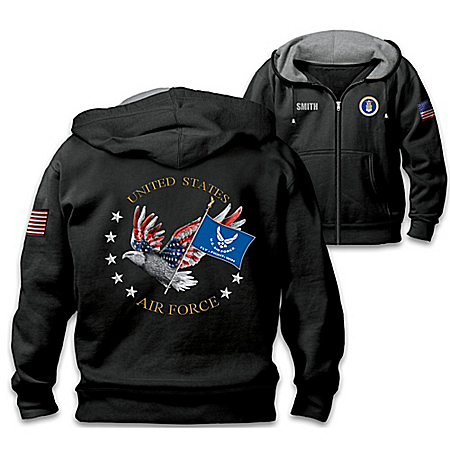 $99.95 If you’re a member of the U.S. Air Force or count yourself among their loyal supporters, now you can slip into military style that really soars! The Bradford Exchange is thrilled to introduce the Air Force Pride Personalized Men’s Hoodie, showcasing a handsome custom design with patriotic military graphics you won’t find elsewhere. This officially-licensed men’s personalized hoodie can even be personalized with your embroidered name across the front for a stirring one-of-a-kind statement of military support.Expertly crafted of an easy-care black cotton blend knit with brushed fleece lining, your Air Force Pride Hoodie features artwork of a patriotic eagle carrying a flag across the back. The flag showcases the Air Force motto of “Fly Fight Win,” and is boldly highlighted with an embroidered “UNITED STATES AIR FORCE” and a star motif. A patch with the Air Force emblem adorns the front, while the left sleeve features an embroidered patch of an American flag for a patriotic touch. Then, to round out the distinctive design of this fine Air Force apparel, are a contrasting gray hood lining, front pockets, knit cuffs and hem, a full front zipper and chrome-look metal tippets on the hood’s drawstrings. Strong demand is expected for this personalized Air Force jacket, so HURRY. Order now!