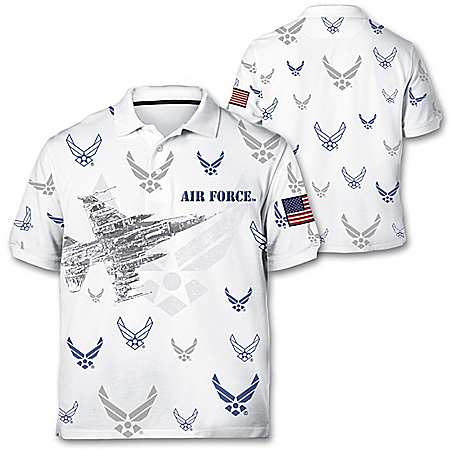 $79.95 Air Force Pride Men’s Custom All-Over Print Polo Shirt With Embroidered American Flag Patch – When you look up to the skies on a bright American day, you know you are safe thanks to the honorable United States Air Force™. Now you can celebrate these aerial warriors with the Air Force Pride Men’s Shirt, a custom apparel design exclusively from The Bradford Exchange. This officially-licensed men’s polo shirt is the perfect wardrobe choice for the Airman “at ease.” A stylish statement of Aim High, Fly-Fight-Win Airman pride, this casual white polo shirt is crafted of 100% polyester. It features an all-over custom pattern of the official Air Force™ symbol in light gray and blue, along with a striking image of an Air Force™ aircraft. Embroidered details include the words “AIR FORCE™” on the front and an embroidered American flag patch on the left sleeve. Rib knit cuffs, a white collar and 3 buttons bring an extra dimension of style to this polo shirt. Strong demand is expected for this Air Force apparel, so don’t delay. Order now!