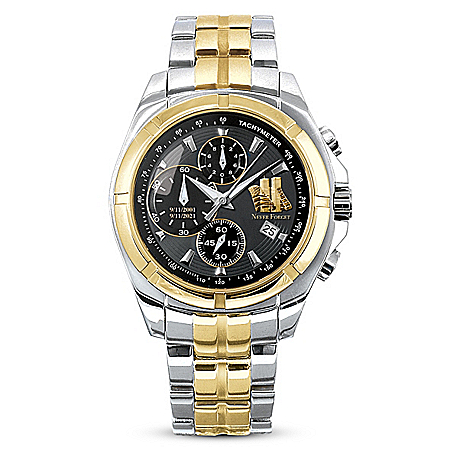 $179.99 9/11 20th Anniversary Men’s Stainless Steel Memorial Watch With A Gold-Tone Finish Featuring An Image Of The Twin Towers Wrapped In The American Flag – Americans awoke the morning of September 11, 2001, with no hint of the horrific events that would unfold during the day. But the shattering tragedies at New York City’s World Trade Center, the Pentagon, and Shanksville, Pennsylvania, called out the best and bravest in us. We united to heal our wounded nation. We rebuilt our cities and stood strong with our heroic and selfless First Responders. We pledged to “Never Forget”…and we have not. Now, you can honor the 20th anniversary of this unforgettable day in history with a commemorative 9/11 watch. Introducing the 9/11 20th Anniversary Men’s Watch, a fine jewelry design exclusively from The Bradford Exchange. This chronograph watch carries a powerful message in a striking design that reminds us of those we lost and the harrowing events that showed the world the grit and backbone of America.Handcrafted in gleaming stainless steel and embellished with a rich gold-tone finish, the front of this exclusive timepiece features a flag-wrapped image of the World Trade Center’s Twin Towers. This unique men’s jewelry sports three sub-dials for seconds, minutes and hours, along with a stopwatch function and date window. The back of the watch is etched with “We Shall Never Forget” along with the sites of the three unspeakable events: “New York”, “Arlington” and “Shanksville”. The back also features images of the Twin Towers, the Pentagon, Flight 93 and a heroic First Responder as well as the etched date underneath the imagery: “September 11, 2001”. Precision quartz movement, an adjustable c-clasp and water resistance up to 3 ATM make this historic watch extremely dependable and comfortable to wear. Arriving in a black custom presentation case, this handsome watch for men is a keepsake that you’ll be proud to wear, and it also makes a thoughtful patriotic gift. Strong demand is ex