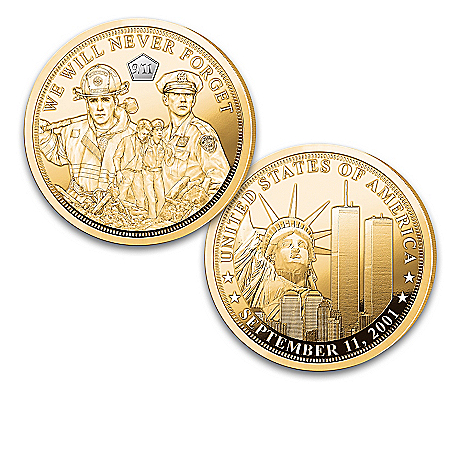 $39.99 The 20th Anniversary Of September 11th 24K Gold-Plated Proof Coin Collection Accented With Silvery Privy Marks – On 9/11/2001, our brave first responders showed everyone what they were made of by running headfirst into our nation’s worst disaster, saving lives and rescuing the fallen. Now, twenty years later, a museum-quality 9/11 tribute remembers those heroic Americans on this historic anniversary. Available exclusively from The Bradford Exchange Mint, The 20th Anniversary of September 11th Proof Coin Collection salutes the commitment and sacrifice of our first responders with commemorative Proof coins, beginning with Issue One, We Will Never Forget. Soon your collection continues with Issue Two, New York Fire Department and FREE display box, followed by Issue Three, National Memorial and 21 additional 9/11 commemorative Proof coins to complete your collection. Each issue will arrive separately.Intended as collectors’ items, each gleaming Proof coin in this collection is offered in coveted Proof condition and richly plated in 24K gold to sustain its heirloom value. The reverse side of the Proofs showcases stirring imagery of first responders and other dedicated souls who cared for so many during the crisis, along with a silvery Bradford Exchange Mint privy mark. On the obverse side, the Statue of Liberty stands proudly behind an outline of New York City and the Twin Towers of the World Trade Center, along with the date of the tragedy. Special coining dies are used to create polished, mirror-like fields and raised, frosted images. Each commemorative Proof coin arrives sealed in a crystal-clear capsule for enduring protection, and a FREE display box is included with your collection so you can display and store your Proofs. What’s more, a portion of the proceeds from each coin will be donated to charities benefitting the families of first responders. Strong demand is expected for this 20th anniversary tribute to 9/11, so don’t miss this opportunity. Order now!