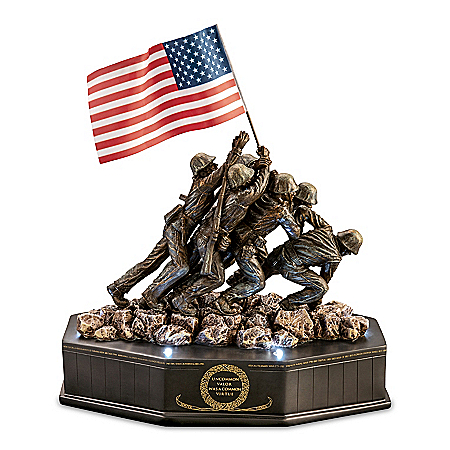 $129.99 75th Anniversary Of Iwo Jima Cold-Cast Bronze Marine Corps War Memorial Lighted Sculpture With The Names Of The USMC Battles – It was February 23, 1945, an epic moment in World War II. Six U.S. Marines climbed Mt. Suribachi and raised our proud American flag, signaling our victory in Iwo Jima. Now, honoring the 75th anniversary of this important event, you can pay homage to our brave WWII heroes with this commemorative Iwo Jima Sculpture, available only from The Bradford Exchange. Offered in an edition strictly limited to 7,500 worldwide, this officially licensed USMC sculpture captures all the glory of a now-iconic and historic moment in a museum-quality tribute, superbly handcrafted in cold-cast bronze. Standing over one foot tall, it beautifully recreates the intricate details of the actual United States Marine Corps War Memorial located outside the gates to Arlington National Cemetery.Just like that national treasure, this sculpture’s octagonal black base is inscribed with “UNCOMMON VALOR WAS A COMMON VIRTUE” and a dedication to “THE UNITED STATES MARINE CORPS WHO HAVE GIVEN THEIR LIVES TO THEIR COUNTRY SINCE 10 NOVEMBER 1775”. Plus, a list of the major battles of the USMC are emblazoned around the perimeter of the base. A real fabric flag makes a defining finishing touch, while six LED lights along the bottom light the sculpture from below and create a dramatic effect. Intense demand is anticipated for this 75th anniversary WWII tribute and it makes an impressive addition to your military decor, so don’t delay. Order now!