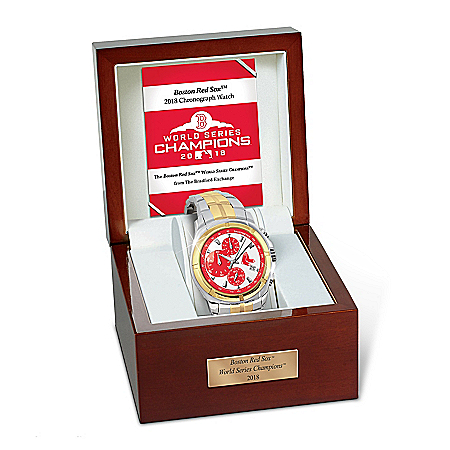 $249.99 2018 was definitively the Red Sox™ time to shine, claiming their rightful position at the top of the MLB™. Now you can show off your loyalty and appreciation for the legendary team and do it in handsome style with this 2018 World Series Champions™ Boston Red Sox™ commemorative men’s watch, a fine jewelry design available from The Bradford Exchange. Officially licensed by Major League Baseball™, this commemorative World Series™ watch is available in a strict limited edition of only 2,018, so if you’re a fan, time is of the essence. This is the ultimate way to honor your 2018 World Series Champions and makes for must-have Boston Red Sox memorabilia.Superbly handcrafted of gleaming stainless steel, this World Series chronograph watch runs with precision quartz movement and features a brushed, silver-toned bracelet-style band with golden accents for an attractive two-toned look. The dramatic watch face showcases the official Red Sox colors of red and white, along with the team’s official logo, while the back of the watch is boldly etched with the World Series Champions logo. Plus, the side of the watch features a “GO RED SOX™!” etching for a winning touch to your 2018 World Series Champions collectible men’s watch. It arrives in a deluxe commemorative wooden presentation case with a gleaming engraved plaque celebrating the 2018 World Series Champions title, perfect for safekeeping or giving as a Boston Red Sox fan gift. Intense demand is anticipated, so now is the best time to bring home this stunning celebration of Red Sox pride. Order now!