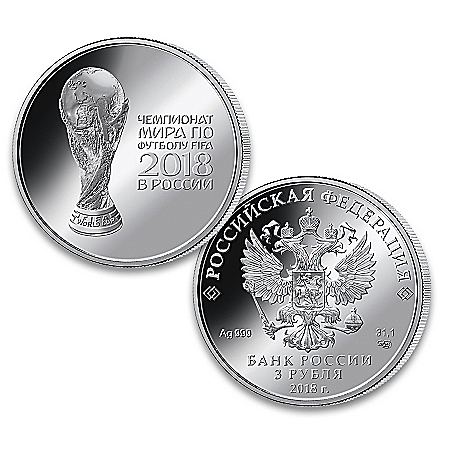 $199 One month. 8 groups. 32 countries. It’s the biggest sporting event in the world – the FIFA World Cup™. Fans view some of the best soccer ever, and see who claims the bragging rights, the record $38 million purse, and the most sought-after prize in soccer – the FIFA World Cup™ Trophy. Now, you can hold on to the thrill of the game with the ultimate commemorative, the 2018 FIFA World Cup One Ounce 99.9% Silver Coin, available from The Bradford Exchange Mint.Officially licensed by FIFA, and minted in the host country of Russia, this legal tender coin is an official, three Rouble coin struck in one ounce of pure 99.9% silver. The obverse features the Russian Coat of Arms, and the reverse depicts the magnificent FIFA World Cup Trophy with a Cyrillic legend stating, “The 2018 FIFA World Cup™ Russia”. This historic FIFA collectible tribute arrives in a licensed, highly collectible FIFA World Cup Russia™ box complete with official logos and colors. Strong demand is expected, so don’t delay. Order now!