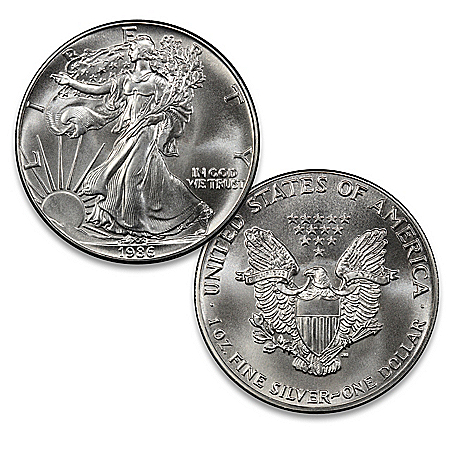 $159 The 1986 First Year Of Issue American Eagle Silver Dollar Coin With Display Box – In the mid-1980s, the United States had both a surplus of silver and a growing budget deficit. The answer to that problem? New silver coins. The Liberty Coin Act authorized what became, in 1986, a silver sensation: the American Eagle Silver Dollar, the very first official American bullion coin. Now, that coveted 1986 first-issue American Eagle coin can be yours in Brilliant Uncirculated condition with The First Year of Issue Eagle Silver Coin, available in an exclusive presentation from The Bradford Exchange Mint. This spectacular silver dollar coin arrives in a crystal-clear tamper-proof holder and includes a Deluxe Display Box with a rich mahogany finish and gleaming title plaque.Initially struck for only a few months late in 1986 at the Philadelphia Mint, each first-year American Eagle contains an amazing one full Troy ounce of 99.9% silver, more than the 90% silver alloy in all previous U.S. coins. The Mint made it even more precious by reviving Adolph A. Weinman’s beloved Walking Liberty design for the obverse. The reverse features a heraldic eagle created by John Mercanti. With a face value of $1, this legal tender bullion coin was intended for investment use and was not sold directly to the public. Yet they quickly sold out through authorized distributors. Today, the 1986 Brilliant Uncirculated Silver Eagle makes up only 1% of the total Silver Eagle mintage – and you can own one! It makes an outstanding patriotic gift, too, but strong demand is expected, so don’t wait. Order now!