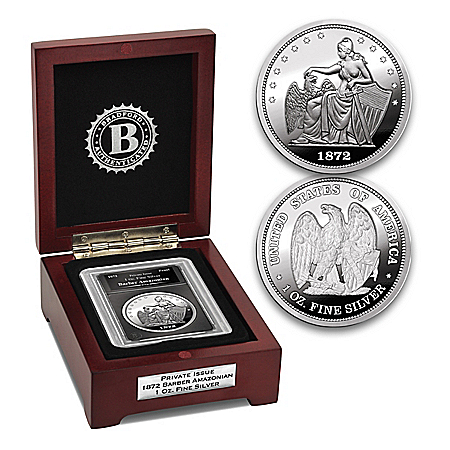 $199.99 The Barber Amazonian 1 Oz. 99.9% Silver Pattern Tribute Proof Featuring A Front Design With William Barber’s Famed “Amazonian” Liberty – Some of America’s most beautiful coin designs are among the rarest: pattern coins produced in tiny quantities to try out experimental concepts. In 1872, the U.S. Mint’s 5th Chief Engraver, William Barber, created a true masterpiece of the minter’s art while exploring new ideas for the U.S. Trade dollar: the Barber “Amazonian” silver quarter, half dollar and dollar coinage. Now, this rare and acclaimed pattern design is reborn with this Barber “Amazonian” 1 oz. silver Proof marking its 150th anniversary. Exclusively from The Bradford Exchange Mint, this impressive tribute Proof is privately minted in one oz. of 99.9% silver and struck with Proof quality coining dies to produce its elegant, frosted imagery and brilliant mirror-bright fields.As required by the Coinage Act of 1792, Barber’s patterns featured Lady Liberty and an American eagle, yet his seated figure of Liberty was no ordinary goddess. With her exposed breast, formidable sword and mighty shield, she suggests the strength and spirit of the bold women warriors of ancient Greek mythology. While considered one of America’s most beautiful coin designs, few “Amazonian” coins were ever produced, so it’s no surprise that a half dollar example recently realized an auction price of around $70,000. This stunning tribute Proof lets you add this rare design to your collection. It arrives secured within a crystal-clear, tamper-proof holder with a holographic seal and bar code. Plus, you’ll receive a custom deluxe display box with a gleaming title plaque, perfect for showcasing your treasure for years to come. Strong demand is expected for the Barber Amazonian 99.9% Silver Pattern Tribute Proof, and it makes an impressive patriotic gift as well. HURRY and order now!