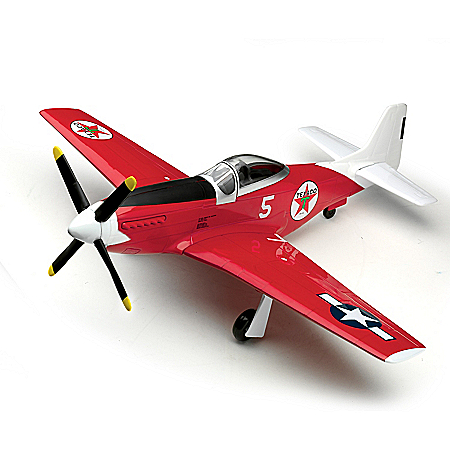 $99.99 Throughout World War II, Texaco worked day and night to deliver vast amounts of oil to fuel the war effort – while in the skies, brave fighter pilots flew missions in one of the greatest fighter planes in combat aviation: the P-51D Mustang. A ferocious fighter of the skies, the P-51D Mustang was a high-performance aircraft and a legendary favorite among pilots. Its unique wing design and powerful engine maximized both speed and performance, ultimately earning the P-51D elite status as the era’s fastest propeller-driven aircraft and the first single-engine aircraft of any country to penetrate German targets from England. Now you can display a stunning tribute to Texaco and the P-51D with the Texaco 1945 North American P-51D Mustang Diecast Airplane, presented by The Hamilton Collection.Every inch of this 1:44-scale diecast airplane is precisely replicated, including the auxiliary fuselage fuel tank with opening door located near the cockpit. The propeller of this famed long-range fighter plane smoothly rotates, plus the teardrop canopy is removable for additional display options. This superior diecast sits solidly on the rubber wheels of the landing gear, which can also be raised and lowered. Its brilliant duo-tone paint finish includes genuine Texaco and D-Day invasion graphics. Plus, your diecast arrives in an official collector box along with a Fuel for Victory Certificate of Authenticity. Strong demand is expected for this riveting Texaco collectible. So don’t wait. Order now!