So Truly Mine Lifelike Baby Doll: Black Hair, Brown Eyes, Dark Skin
Love My Yorkie To The Moon And Back Heirloom Music Box 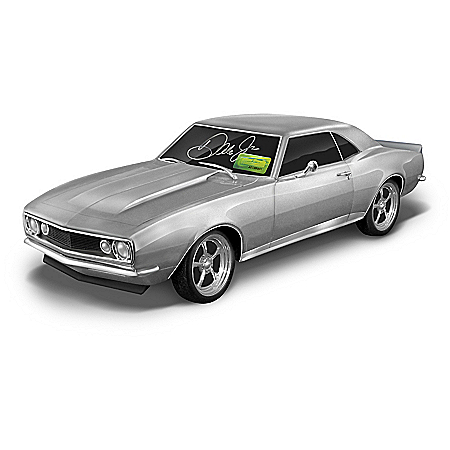 $199.95 Dale Earnhardt Jr. Authentic Autographed 1:18-Scale 1967 Camaro Sculpture Featuring A Glistening Silver Paint Finish – Given the fact that Dale Jr. grew up in a family whose name is synonymous with Chevy both on and off the track, it’s not surprising that one of his favorite rides is a 1967 Chevy Camaro. He loves the car’s rare combination of grip and power and, while some parts have been retrofitted, the car has largely remained true to the original. Now, celebrate this legendary driver and your shared passion for fast cars with the Dale Earnhardt Jr. Autographed 1967 Camaro Sculpture, only from Motorsport Editions™. Officially licensed by JR Motorsports and General Motors, this 1:18-scale sculpted replica is hand-signed by Dale Earnhardt Jr.!Expertly sculpted to precisely replicate the ’67 Camaro’s sleek lines, long hood and short body style in BIG 1:18-scale, this autographed car sculpture boasts a glistening silver paint finish with metallic-colored trim, realistic Camaro SS badging, and a custom rear license plate that reads “DALE JR.” Best of all, the windshield bears Dale Jr.’s personal signature along with a special hologram that certifies his signature as authentic. What a thrilling find for Dale Earnhardt Jr. fans and collectors of autographed sports memorabilia! But hurry – the edition is limited to only 670 sculptures and strong demand is expected. Order now!

So Truly Mine Lifelike Baby Doll: Black Hair, Brown Eyes, Dark Skin
Love My Yorkie To The Moon And Back Heirloom Music Box