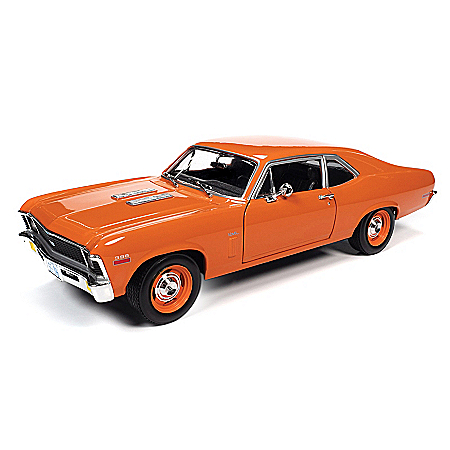 $149.96 1:18-Scale 1970 Chevrolet Nova SS 396 Diecast Car Featuring Hugger Orange Authentic Paint Finish & Rubber Tires – In 1970, the Chevy Nova finally came into its own. While in production since 1962, this new decade allowed the brand to embrace its own legacy – and the Nova was officially removed from the Chevy II umbrella. But that wasn?t the only change 1970 would usher in for Chevy?s smallest muscle car. Available as both a two-door fastback coupe or four-door sedan, the re-imagined 1970 Chevy Nova showcased several new design enhancements, including a stylish new egg-crate patterned front grille and modified side marker lights and taillight lenses. The most defining change, however, was found under the hood – the option to upgrade to the optional Super Sport (SS) package and enjoy the performance of a 375-hp 396ci V8 – the big block 396! Now, you can own an impressive recreation of the smallest muscle car to ever come out of Detroit with the 1:18-Scale 1970 Chevy Nova SS 396 Diecast Car, presented by The Hamilton Collection and manufactured by Round 2 LLC, under license with General Motors.Precision engineered with over 200 individual parts to perfectly capture every defining detail inside and out, this 1:18-scale diecast car is sure to impress even the most discerning car enthusiast. There’s plenty of power to be found under the hood with a plumbed and wired Turbo-Jet 396ci V8 big-block engine paired to the Nova’s M-22 manual transmission. The highly detailed interior boasts the iconic “Rock Crusher” cue-ball shifter and folding seats; the front wheels are even steerable. Plus, you’re sure to marvel at its bumper to bumper beauty; from the chrome-look trim and vanity plates to its modified taillight lenses, the Nova impresses throughout. The authentic Hugger Orange paint finish provides the perfect finishing touch to this small but powerful muscle car. Strong demand is expected for this must-have Chevy collectible diecast car, so don’t wait. Order now!