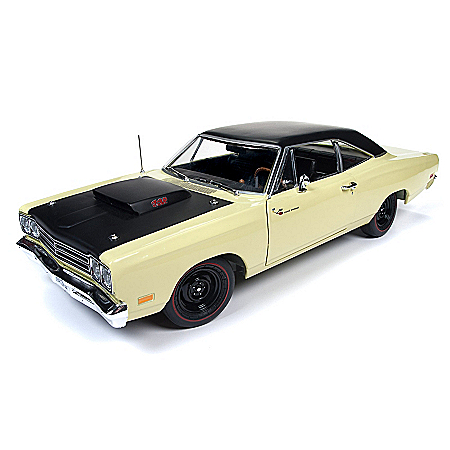 $149.95 1:18-Scale 1969 Plymouth Roadrunner Coupe Diecast Car Featuring A Highly Detailed 440 Cu. In. Motor Painted In HEMI Orange – By the middle of the 1960s, the Big Three auto manufacturers’ battle of the muscle cars was really heating up. Chevy and GM were stepping up their game to take on the Chrysler 426… but Chrysler took it up another notch in ’66 with the 440 V8 engine. Produced until 1978, the Chrysler 440 V8 was the last of the over-400 cu. in. Mopar engines. While not as powerful as the 426 HEMI®, it was half the price which made it appealing to many buyers. The 1969 Plymouth Roadrunner was a monstrous factory-made drag racer capable of approaching the speeds of the stock 426 HEMI. Now, over 50 years later, you can drive off with a thrilling tribute to this ’69 muscle car with the 1:18-Scale 1969 Plymouth Roadrunner Coupe Diecast Car, manufactured by Round 2, LLC under license, and presented by The Hamilton Collection.With torque-laden speed and an attitude that screams, “get outta my way,” this 1969 Roadrunner Coupe diecast car is precision engineered in rugged die-cast metal with incredibly authentic details true to the original muscle car. The star of this desirable tribute is the highly detailed recreation of the 440 cu. in. motor painted in the proper HEMI® Orange. This impressive 1:18-scale diecast car model also features the V02 option with a black top, a lift-off hood and opening doors and trunk. Your ready-to-race Plymouth collectible tribute is hand-painted in a factory-matched Y2 Sunfire Yellow paint scheme, sure to impress gear heads and diecast fans alike. Strong demand is expected for this must-have classic car replica, so don’t wait. Order now!