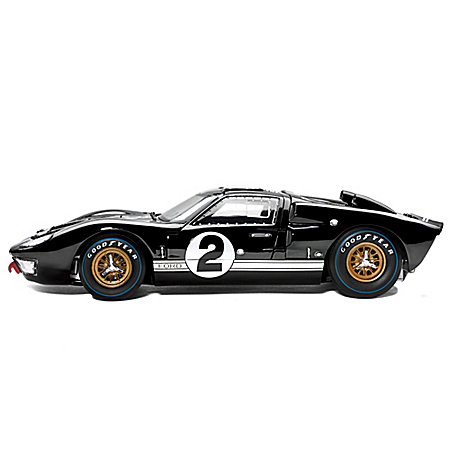 $99.99 In 1966 ford rocked the international racing circuit with its historic 1-2-3 sweep at the 24-hour Grand Prix d’Endurance at Le Mans! The legendary car that took first place? The 1966 Ford GT-40 Mark II #2, a 2-door coupe that could reach 60 mph in 5.2 seconds – topping out at 199 mph. Now you can celebrate this trail-blazing car with the 1:18-Scale 1966 Ford GT-40 MK II #2 Diecast Car, presented by The Hamilton Collection. Every praise-worthy detail of the real deal is faithfully replicated in this Ford diecast car, precision engineered and beautifully crafted in 1:18-scale by Shelby Collectibles to replicate the high-performance car that made Le Mans history.This spectacular diecast replica car boasts an opening hood, trunk and doors, and features a finely articulated interior and engine along with PVC Goodyear tires, working steering, and official race-inspired graphics. A high-gloss black paint treatment along with signature racing stripes and a wealth of chrome-colored accessories give this car an impeccably realistic look. It also comes with a removable display base with nameplate. If you’re a fan of American racing cars, you don’t want to miss this, but HURRY! Strong demand is expected, so order now!