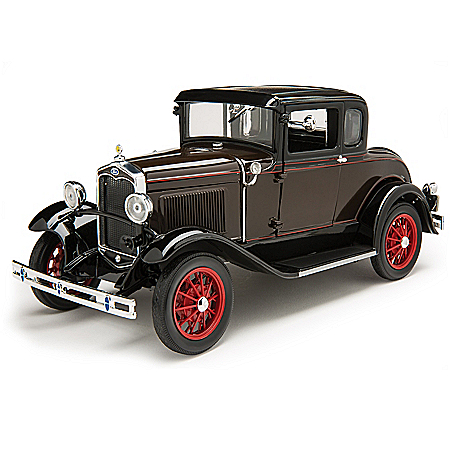 $149.96 1931 Model A Deluxe Coupe 1:18-Scale Diecast Car Featuring A Black & Maroon Two-Tone Paint Finish With A Vermillion Red Stripe & Rubber Tires – The mid-1920s brought lagging sales for the groundbreaking Model T. Henry Ford needed to act quickly if he wanted to get a jump on the growing number of competitors, so he halted production of the Model T and went to work retooling his factories and perfecting the design of a new car. The Ford Model A was first introduced in 1927 with great fanfare. It was an unqualified success! But with The Great Depression ramping up, the writing was on the wall for the Model A, and the 1931 model was the last Ford produced. Now, you can bring home a superior tribute to this blockbuster sequel to the Ford Model T with the 1931 Model A Deluxe Coupe Diecast Car. Presented by The Hamilton Collection, this precision-engineered 1:18-scale diecast car is loaded with authentic details that have been meticulously rendered to capture all the style of the original automobile.Featuring good looks and cutting-edge technology, this highly detailed Ford collectible boasts a bi-folding butterfly hood that opens to reveal the L-head inline four-cylinder engine. The side doors also open to show off the fully detailed interior, including poseable steering. Additional authentic touches include smooth-rolling rubber tires, a rear-mounted spare on the bumper and one of the most popular features of the Model A, an opening rumble seat. And to top it all off, this luxurious Ford diecast car is hand-painted in a color scheme exclusive to The Hamilton Collection, Black and Ford Maroon with a Vermillion Red Stripe! Strong demand is expected, so don’t wait. Order now!