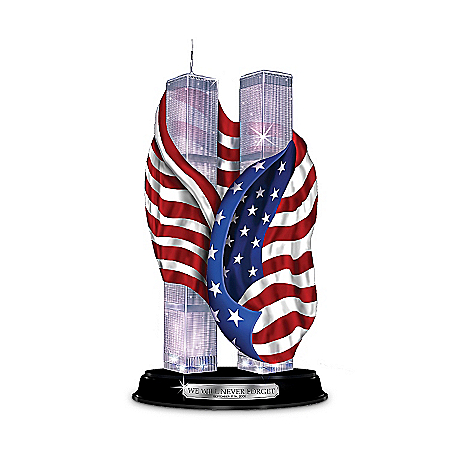 $99.99 We Will Never Forget Sculpture: Honoring The 10th Anniversary Of September 11th – When the Twin Towers fell on September the 11th, 2001, there rose a new America, hardened in spirit and resolved to never forget. To honor the 10th anniversary of 9/11, we are proud to introduce a commemorative Twin Towers sculpture – a stunning illuminated tribute to a day we will never forget. Most importantly, a portion of the proceeds will be donated to support families of emergency responders who died in service.A Bradford Exchange exclusive, this shining September 11 tribute recreates the unmistakable image of the World Trade Center’s Twin Towers, captured in handcrafted crystal clear artist’s resin. With the flick of a switch, watch as the illumination of this Twin Towers sculpture changes from red to white to blue, to give this dramatic September 11 tribute a soft, reverent glow. This captivating Twin Towers sculpture is embraced by a real fabric American flag, and rests atop a solemn gloss black base with an etched silver title plaque. A masterpiece of heirloom quality, this soaring September 11 tribute is a moving way to ensure you will never forget. Order now!