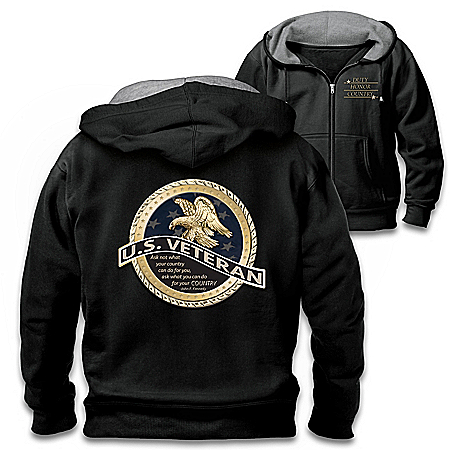 “Ask not what your country can do for you, ask what you can do for your country.” These memorable words from President John F. Kennedy’s 1961 inaugural address have resonated throughout history as a call to service, particularly profound to veterans who continue to live by its meaning. Now, the U.S. Veteran Men’s Hoodie lets you carry memories of the speech that ignited a movement, expressed in a custom apparel design only from The Bradford Exchange.This handsome front-zip hoodie is expertly crafted in a black easy-care cotton blend knit with a stirring patriotic design across the back, featuring a golden American Eagle and star appliqu├â┬⌐ patch with President Kennedy’s iconic quote, surrounded by a rope and a star border. Gracefully waving over the all-American design is an embroidered banner that reads “U.S. VETERAN” and embroidered in golden thread across the front are three words that serve as a constant reminder of a soldier’s commitment: “DUTY HONOR COUNTRY”. The custom details of this fine military apparel include a brushed fleece interior, thermal knit-lined hood, kangaroo front pockets, knit cuffs and hem and silver-toned metal tippets on the hood drawstrings. Strong demand is anticipated, so don’t delay. Order now! $99.95 USD