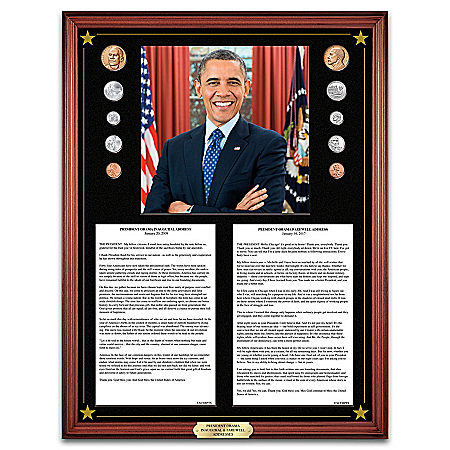 From the moment of his election in 2008, Barack Obama made history. The first African American elected President of the United States, he has famously said that his life story is one that “could only have happened in America.” Now his eloquence and historic legacy are celebrated with the President Obama Inaugural & Farewell Addresses Wall Decor, available in an exclusive presentation from The Bradford Exchange Mint. This striking President Obama wall decor unites excerpts from his Inaugural and Farewell addresses with iconic imagery and U.S. minted coinage.Honoring a historic presidential legacy, this Barack Obama collectible tribute showcases a full-color image of 44th President Barack Obama’s official 2009 White House photo along with two facsimile transcripts from his First Inaugural Address on January 20, 2009 and his Farewell Address on January 10, 2017. Flanking his photo are two full sets of U.S. Mint coins from the first year of each of President Obama’s two terms of office, four from 2009 and four from 2013, presented in Brilliant Uncirculated condition. Two official U.S. Mint-issued Bronze Inaugural Medals, one for each of Mr. Obama’s terms, add more distinction to this one-of-a-kind tribute. Rich black matting with golden accents adds a stately touch, and a museum-quality, mahogany-finished wooden frame with protective tempered glass completes the presentation. Strong demand is expected, so order now!