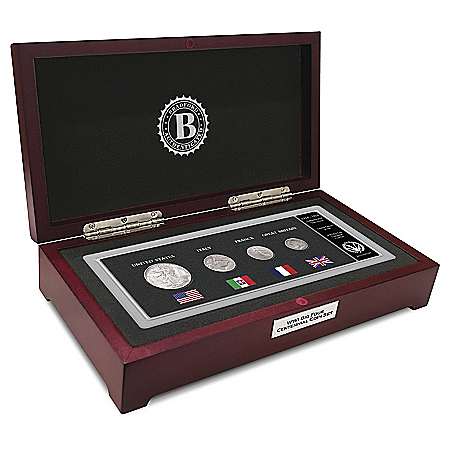 A century ago, Americans entered into the first truly global conflict in history. With its advances in weaponry, aircraft and tanks, WWI resulted in a staggering, tragic loss of life. Finally, in 1918, the Great War ceased, yet peace remained elusive until the Big Four leaders of the victorious coalition produced the Treaty of Versailles that ended WWI. Now, to mark the 100th anniversary of this historic conference, The Bradford Exchange introduces The Big Four WWI Centennial Coin Set, an exclusive presentation strictly limited to 500 sets worldwide. This impressive set features four official legal tender coins – one from each of the victorious Big Four nations. Now scarce, each historic coin was circulated during the World War I era.The set includes a U.S. Walking Liberty Half Dollar, a French 50 Centimes and a Great Britain 3 pence coin, each struck in silver, along with a rare Italian 20 Centesimi struck in nickel. The coins are sealed together within a crystal-clear, tamper-proof holder for permanent protection. A museum-quality, mahogany-finished, deluxe display box completes this handsome presentation and is included FREE. This remarkable four-coin set makes an impressive patriotic gift for yourself or any history buff. Strong demand is expected for this strictly limited-edition coin set. Therefore, to avoid disappointment, you are urged to order now! $199.00 USD