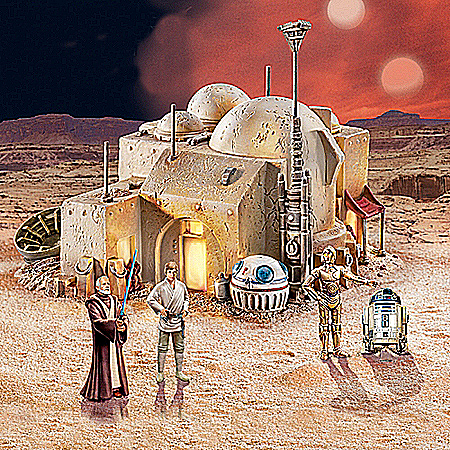 A long time ago, in a galaxy far awayâ€¦ a science fiction epic was born. The groundbreaking Star Wars® saga soon exploded into a cultural Force to be reckoned with. Now, over thirty years after the release of the original film, a first-ever Star Wars village collection summons all the excitement of the cinematic masterpiece, beginning with Issue One, Mos Eisley Cantina with FREE Luke Skywalker figurine. Soon, your collection will continue with Issue Two, Hoth Rebel Base with FREE Darth Vader figurine followed by Issue Three, Endor Bunker with FREE Han Solo figurine. Additional Star Wars village buildings, each a separate issue, will follow.‡Officially authorized by Lucasfilm™ and available exclusively from The Bradford Exchange, Hawthorne Village Division, each of the Star Wars collectible buildings in this collection lets you recreate a memorable scene from the movie in vivid 3-D and illumination. Authentically handcrafted and hand-painted in amazing detail, you’ll thrill at your journey across the vast Star Wars galaxy. From the arid dunes of Tatooine to the lush forests of Endor and beyond, this dramatic collection will keep the Force with you. Intense demand is expected, so don’t miss out. Order now!