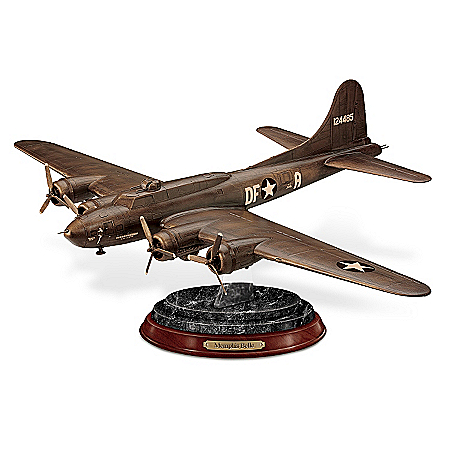 On November 7, 1942, a crew of ten brave men boarded a certain Boeing B-17 for the first time. It was the inaugural mission of a now-legendary plane, one that would ultimately complete 25 successful combat missions with her crew intact. Now, a limited-edition Memphis Belle sculpture salutes the iconic aircraft on her 70th anniversary, giving you a rare opportunity to bring home a piece of World War II history. Only from The Bradford Exchange, this dramatic tribute sculpture is hand-cast in cold-cast bronze with hand-painted bronze tones to capture all the stunning detail.Zoom in closer to this cold-cast bronze airplane sculpture to admire all of the historically accurate detailing, from George Petty’s famous pin-up girls flanking both sides of its nose to the proud tally of 25 bombs, indicating the number of successful missions flown. A custom-designed stand even “lifts” the B-17 sculpture off a museum-quality base giving the illusion of flight. Your collectible Memphis Belle sculpture includes a bonus Collector’s Card filled with the plane’s specs, but its strict limited edition of only 7,000 ensures this 70th anniversary tribute won’t be around long. To make sure you don’t miss it, order now!