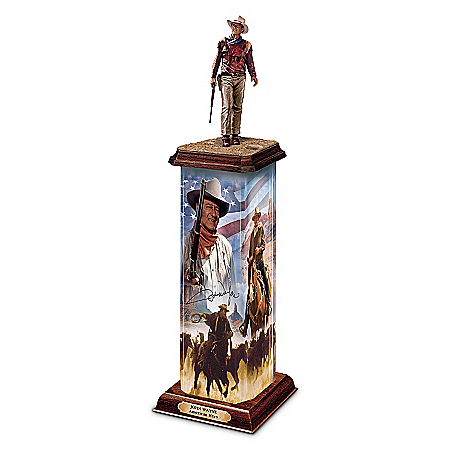 At six feet four inches (without his boots), John Wayne stood tall, literally and figuratively, throughout his life. Now, in honor of The Duke, a true American hero, this bold illuminated sculpture stands tall as well, offering the perfect tribute to a legendary man and great patriot. Introducing the John Wayne: An American Hero Sculpture, officially licensed by the estate of John Wayne and issued in a strictly limited edition of just 10,000 and available ONLY from The Bradford Exchange.A stirring, handcrafted and hand-painted sculpture of John Wayne, his rifle in hand and poised for action, crowns this spectacular sculpture. Beneath the sculpture, an elegant four-sided column showcases a stunning montage of John Wayne movie images, set against a billowing image of the American flag and highlighted by John Wayne’s replica signature. At the touch of a switch, this bold montage is set aglow from within. The back panel of the column lists John Wayne’s awards and achievements, including the Congressional Gold Medal and Presidential Medal of Freedom. As the perfect finishing touch, the base features a plaque inscribed with “John Wayne American Hero.” Fans of The Duke are sure to line up for this limited-edition illuminated sculpture, and intense demand is expected, so don’t delay. Order now!