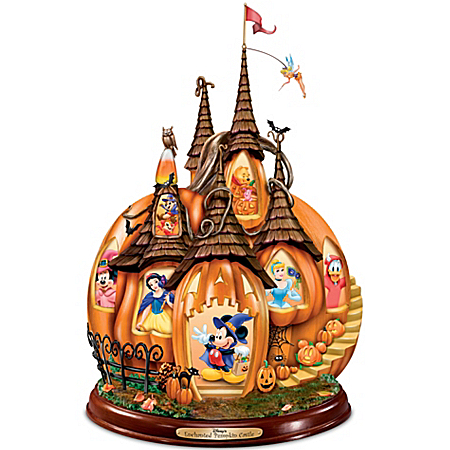 If there’s one thing Mickey Mouse knows how to do, it’s to have fun with his friends. Now, join him and a lovable cast of Disney characters for a spook-a-riffic Halloween celebration, captured in a Disney pumpkin castle sculpture that’s frightfully exciting! An original design from The Bradford Exchange, the Disney’s Enchanted Pumpkin Castle Sculpture is a masterpiece of archived Disney imagery, illuminated sculpture, and Halloween sounds.This Disney castle sculpture is handcrafted and hand-painted to capture the realistic look of a hand-carved pumpkin. In each “carved” window, colorful Disney art showcases 12 of your favorite Disney characters in Halloween costumes. There’s even a sculpture of Tinker Bell suspended from the top of the Disney castle, and she moves at the slightest touch. At the flip of a switch, the whole Disney pumpkin castle sculpture lights up from within, accompanied by an eerie medley of Halloween sounds. Edition is limited to 120 casting days, and strong demand is expected, so order now! A fine collectible, not intended for children. $109.99