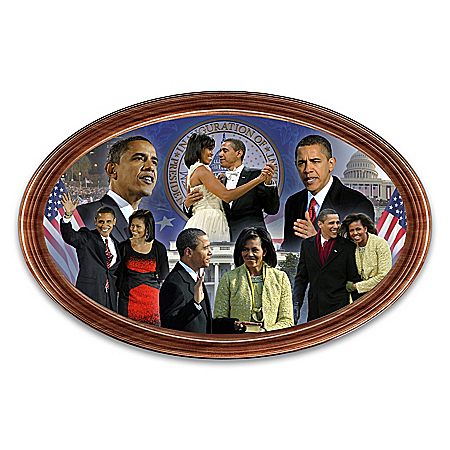 President Barack Obama 10th Anniversary Oval-Shaped Framed Collector Plate – Can it be ten years since an idealistic young senator from Illinois ascended to the highest office in the land, bringing a message of hope and change? Eight years in office saw President Obama make good on his pledges to reform health care, protect the environment, regulate Wall Street, end the War in Iraq and much more. Throughout his Presidency, Mr. Obama was aided by his wife Michelle, a brilliant First Lady whose outstanding initiatives in health and education complemented the President’s vision for America. Now you can pay tribute to their legacy with the President Barack Obama 10th Anniversary Collector Plate, available in a limited edition of only 10,000 worldwide exclusively from The Bradford Exchange. This commemorative President Obama plate showcases a montage of highlights from his inauguration.This grandly sized, nearly-16-inch-wide, fine collector plate pays homage to Barack Obama’s historic election in 2008 on an impressive, pre-framed oval print. A dramatic montage portraying this election, both inaugurations, the swearing-in ceremony, and much more come alive before a backdrop of the Presidential Seal, the White House and the Stars and Stripes. Its elegant shape and wood-grained frame make it a statement of patriotism you’ll be proud to display. A worthy tribute to an exemplary leader, this framed collector plate is a must-own Barack Obama collectible. Strong demand is expected, so don’t wait. Order now! $129.99 USD