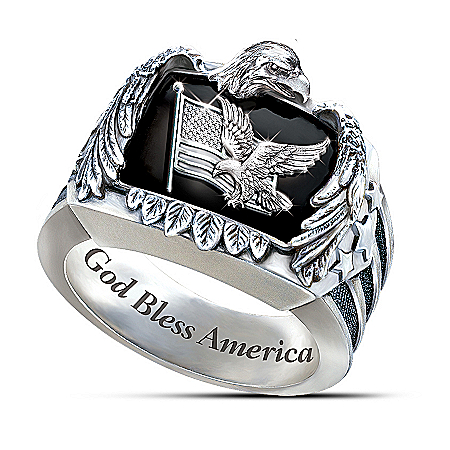 A majestic American eagle soaring and our Nation’s flag – these are the ultimate symbols of our most cherished American ideals of freedom, strength and dignity. Now you can wear your pride for your country every day with an exclusive sterling silver patriotic ring available only from The Bradford Exchange. Decorated with the graceful elegance of the American eagle and featuring a powerful inscription, this men’s handsome fine jewelry design is a bold tribute to our storied history. As seen on Lifetime Television’s “The Balancing Act.”Expertly handcrafted of gleaming solid sterling silver, this patriotic men’s ring features two noble American icons – the flag and the bald eagle – standing out in raised relief against an inlay of genuine black onyx. You’ll love how a second sculpted American eagle and its powerful wings frame the center stone while the symbolic Stars and Stripes decorate each side of the ring band. As a final touch, this sterling silver patriotic ring is engraved with “God Bless America.” Hurry to make this a treasured patriotic keepsake for you or to give as a unique jewelry gift for him. Strong demand is expected, so order now!