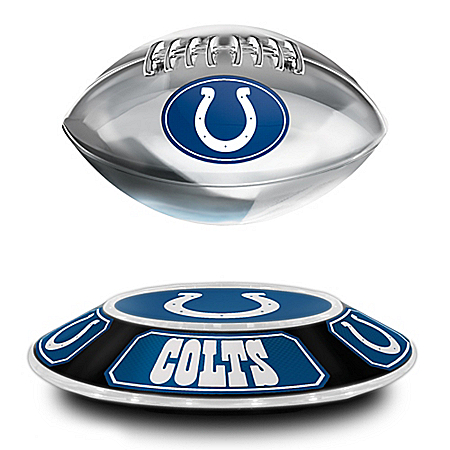 Each time the Colts hit the gridiron, they treat their fans to a riveting game of football, from their breathtaking passes to their exciting touchdowns! It’s these thrilling plays that have now inspired the Indianapolis Colts Levitating Football Sculpture, a first-of-its-kind tribute exclusively from The Bradford Exchange. Officially licensed by NFL Properties LLC, it’s sure to be a focal point in your NFL collection with its shining Colts football that actually hovers and spins in mid-air, recreating all the thrill of game day at Lucas Oil Stadium.Meticulously crafted, this impressive presentation is a truly unique celebration of Colts football because of its innovative use of hidden electro magnets to power its amazing levitation! Suspended above a base emblazoned with iconic Colts logos and team colors, the shimmering silvery Colts football also boasts the team logo. Plus, at the flip of a switch, the base shines light up on the floating football for a thrilling, dramatic effect. Strong demand is expected for this limited-edition Colts tribute, so hurry to score one of your own; it also makes a distinctive Indianapolis Colts fan gift. Order now!