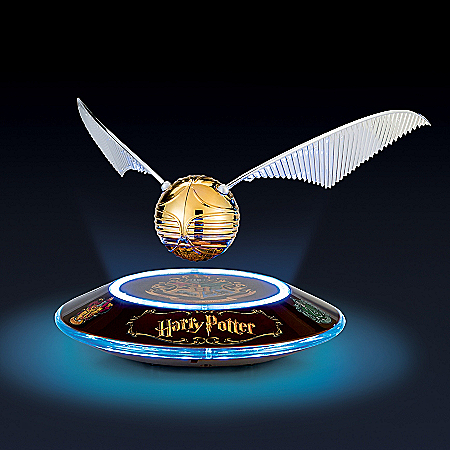 In the wizarding sport of QUIDDITCH™, HARRY POTTER™ battled valiantly to capture the elusive and powerful GOLDEN SNITCH™, which paused, hovered in mid-air and traveled at high speeds. Now, you can harness the power of the SNITCH™ with the HARRY POTTER Levitating GOLDEN SNITCH Sculpture, exclusively from The Bradford Exchange. This gleaming, winged recreation actually floats and rotates in mid-air, capturing all the thrills of QUIDDITCH.This limited-edition levitating sculpture is unique because of its hidden electro magnets which suspend the SNITCH above the illuminated base! The light-up base showcases crests of the four iconic HOGWARTS™ houses: GRYFFINDOR™, HUFFLEPUFF™, RAVENCLAW™, and SLYTHERIN™, as well as the HOGWARTS crest. Plus, at the flip of a switch, blue LED lights glow at the top of the base and around the perimeter for an enchantingly dramatic effect. Strong demand is expected for this Harry Potter collectible sculpture, so don’t wait to seize this levitating tribute to the magic of HARRY POTTER. Order now! $199.99 USD