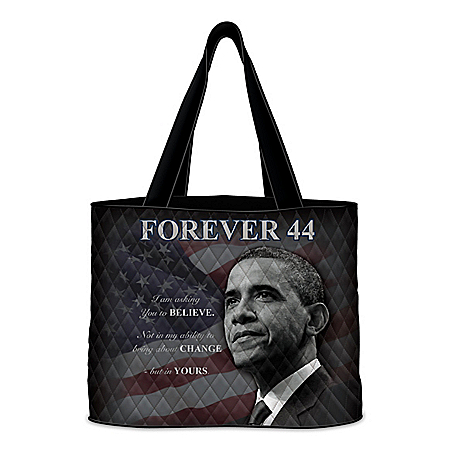 Barack Obama’s empowering campaign, milestone election and remarkable tenure as the 44th president ignited the hope of millions. His “Yes We Can” legacy endures with the continued belief that every American can bring about change. Now you can honor his legacy with the Forever 44 Tote Bag. An inspiring Barack Obama tribute, this bag is a fashion design original exclusively from The Bradford Exchange.This tote bag showcases a black and white portrait of Barack Obama on both sides, along with an excerpt from his 2017 farewell speech that reads, “I am asking You to BELIEVE. Not in my ability to bring about CHANGE – but in YOURS.” An American flag waves proudly in the background for a bold look. Crafted in a black cotton-polyester twill and quilted in a traditional diamond pattern, it has everything you need including design details like a top-zip closure, an interior zippered pocket and two slip pockets. The art is so detailed and realistic you can almost feel his powerful presence! An uplifting addition to your own wardrobe, this fashionable and functional Obama tote also makes a great patriotic gift. Intense demand is expected, so don’t delay. Order now! $69.95 USD