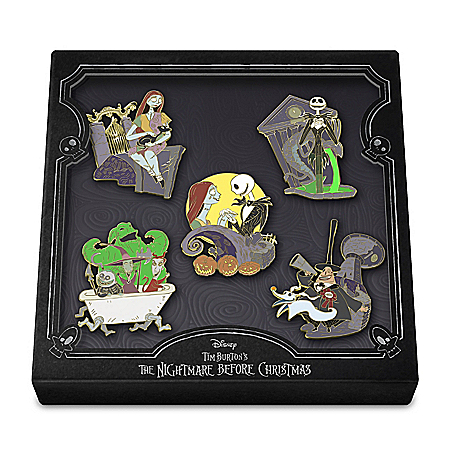 The stop-motion film, Disney Tim Burton’s The Nightmare Before Christmas, is a spooky delight that has captured millions of moviegoers’ hearts with its original story, quirky characters and bold colors. Now, celebrate this Disney masterpiece’s 25th anniversary with the Disney Tim Burton’s The Nightmare Before Christmas Pin Set, licensed from Disney and available from The Bradford Exchange. Hand-enameled in the film’s signature hues and plated in 24K gold, these five collector pins create a must-have set for fans of the classic film.Each of the five unique pins recall a memorable scene from the film: Sally pondering her feelings for Jack; “The Pumpkin King” rising from the fountain in front of City Hall; Jack and Sally confessing their love in the moonlight atop Spiral Hill; Oogie Boogie laughing as Lock, Shock and Barrel venture to Christmas Town in their bathtub; and Zero flying by Dr. Finkelstein’s Lab as The Mayor speaks to the citizens through his megaphone. All five pins arrive together in a custom collector keepsake box. Strong demand is expected and this Disney collectible is available in a strictly limited edition of only 2,500 worldwide, so don’t miss out. Order now!Fine collectibles, not intended for children.