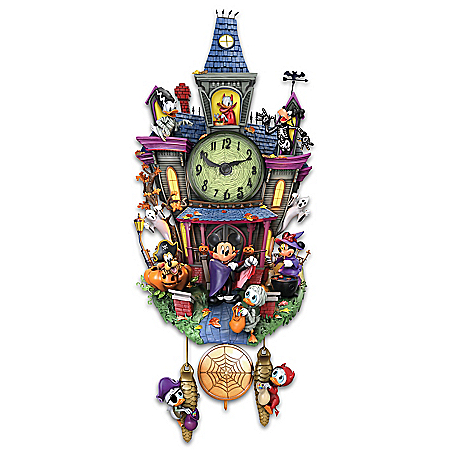 There’s no better way to get in the Halloween spirit than hanging with your favorite Disney characters! Now, you can revel in some spooky fun with the Disney Spooktacular Halloween Cuckoo Clock, licensed from Disney and available from The Bradford Exchange. Handcrafted by master artisans to look just like a three-story haunted house, this fully sculpted Halloween-themed wall clock is hand-painted and filled with design touch after design touch that make it a masterwork of the highest caliber. From the bat-shaped weather vane up top to the spider web clock face with bat wing hands to the brightly colored fall leaves in the front yard, no detail has been overlooked! Making this fright night truly spooktacular are two special treats – lights and music at the top of each hour!Look closely and you’ll spot nine of your favorite Disney characters dressed up for trick-or-treat fun! Disney’s Donald Duck, Daisy Duck and Goofy are up in the attic. Pluto is popping out of a giant jack-o-lantern in the front yard. Minnie Mouse is stirring up fun in her cauldron. And Mickey Mouse is the evening’s host – one you can really “Count” on! Huey, Louie and Dewey are swinging by for the festivities as well, with two of them on the decorative weights right next to the spider web pendulum. The mansion’s lights flicker eerily and spooky music plays at the top of the hour, adding just the right amount of Halloween atmosphere every time. A spectacular find for fans of Disney and Halloween, this Disney collectible cuckoo clock is issued in a limited edition of 295 casting days and strong demand is expected, so don’t wait. Order now!This fine home decor is not intended for children. $199.99