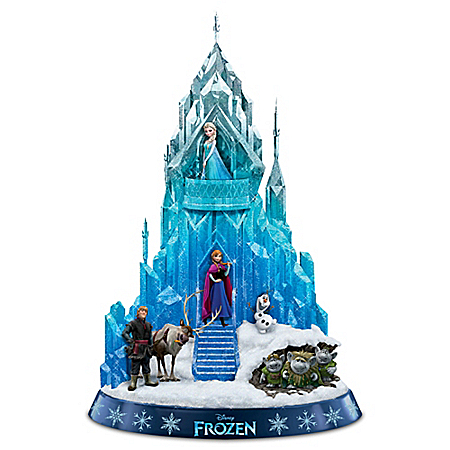 Finally, they’re opening up the gates! Come on in and see who you’ll meet in the Disney FROZEN Ice Palace of Elsa, The Snow Queen of Arendelle Sculpture, a first-ever from The Hamilton Collection. Measuring a gigantic 14 inches high, this ice palace sculpture is licensed from Disney and brings home all the charm of Disney’s most celebrated animated movie ever, “Frozen,” and the stars that have forever stolen our hearts including Elsa, Anna, Kristoff, Olaf and more!From the bottom of the base featuring Elsa’s unique and individual snowflake designs to the top of the tallest icy spire, this Disney FROZEN ice palace sculpture is entirely handcrafted in clear artist’s resin to create the look of shimmering ice. It is painted by hand in vivid colors, with hand-applied glitter on Elsa’s gown and the snow. And, for added enchantment, this Disney FROZEN Ice Palace of Elsa sculpture plays the movie version of the beloved song “Let It Go” and lights up with the icy cool glow of 6 blue lights! Strong demand is anticipated for this Disney FROZEN sculpture and the edition is limited to 95 casting days, so don’t delay. Order now!A fine collectible, not intended for children. $199.95