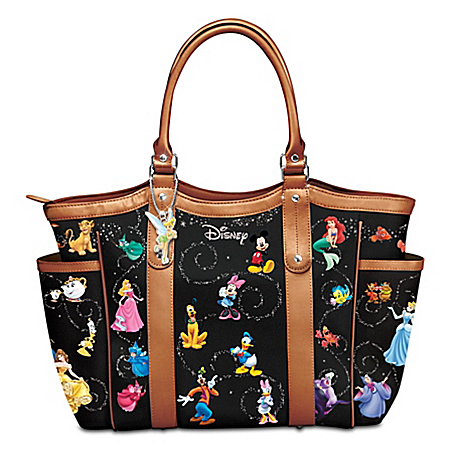 Nothing completes an outfit like a perfect Tote Bag, especially when it adds a little magic to your attire. Now, add classically charming appeal that’s ideal for any outfit with the Disney Carry The Magic Tote Bag, an original designer-style carryall available from The Bradford Exchange. This Tote Bag is expertly crafted of black printed poly twill fabric with brown faux leather trim and silver-toned hardware. Under a glittering Disney logo, Mickey Mouse and many of his Disney character friends stand front and center on this Tote Bag, ready to help you bring a bit of magic wherever you go. Beautiful and roomy, it’s even large enough to fit a laptop inside!Characters from “Sleeping Beauty” and “The Little Mermaid” frame the front of this Disney bag while the sides feature characters from “The Lion King” and “Finding Nemo.” The two exterior pockets showcase timeless Disney Princess characters, Cinderella and Belle as the back displays Snow White and the Seven Dwarfs, Aladdin, and Winnie the Pooh. Swirling stars throughout and a Tinker Bell charm dangles from the front handle for added delight. Plus, a top zip closure, centered zip compartment, inside zippered pocket, and two slip pockets ensure your belongings are organized and secure. Strong demand is expected, so order now!This fine accessory is not intended for children. $129.95