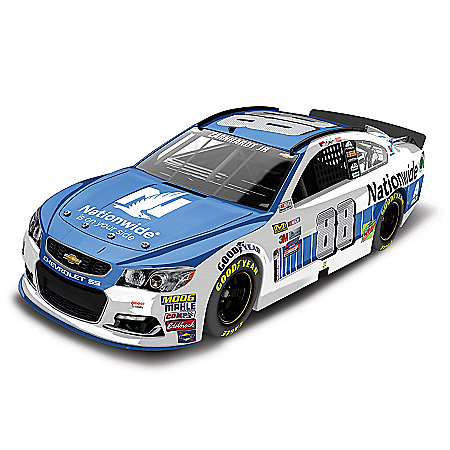 After missing the final 18 races of the 2016 season, Dale Jr. thrilled fans across the globe when he returned to action at the season-opening DAYTONA 500® in his No. 88 Nationwide Chevrolet SS. And when the NASCAR® legend announced that 2017 would be his last season, the auto racing world knew they were losing a legend. Now, you can celebrate his last lap and one of his thrilling final-season rides with the Dale Earnhardt Jr. No. 88 Nationwide 2017 Diecast Car, available from Motorsport Editions™. Precision-engineered by Lionel Racing in collector’s preferred 1:24 scale, this diecast car is officially licensed by NASCAR® and a must-have Dale Earnhardt Jr. collectible.This amazing diecast car boasts over 180 individual parts and a diecast body and chassis. Realistic touches include an opening hood and trunk, manufacturer-specific engine detail, a detailed interior, rolling Goodyear tires and more. Plus, your collectible diecast is imprinted with a special Diecast Identification Number – DIN™ – for registration along with a silver sticker indicating production run size to maintain authenticity. This is a rare opportunity to own a diecast replica in 1:24 scale of one of the last cars Dale Jr. will ever race, and peak demand is anticipated for this Dale Earnhardt Jr. No. 88 Nationwide 2017 Diecast Car. So don’t miss out. Order now!