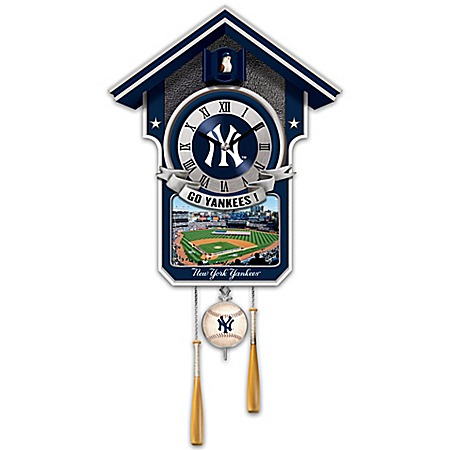 From the first crack of the bat to the game-winning run, Yankees™ fans show their support time and again. Now, stir up your New York Yankees™ pride any time you like with a wall clock specially created for those dedicated fans: the Moments of Greatness: The New York Yankees Cuckoo Clock, officially licensed by Major League Baseball Properties, Inc. and available from the Bradford Exchange. It’s a unique and timely tribute to baseball’s winningest team and sure to become a home run fan favorite, and the edition is limited to just 10,000.This collectible Yankees wall clock is meticulously handcrafted and hand-painted in authentic Yankees blue and white with gray accents. Boasting a quartz-accurate timepiece, it also showcases a full-color scene of New York’s Yankees Stadium™ on a beautiful game day. The clock face features classic Roman numerals and a bold “NY” logo with a “Go Yankees” banner just below. Sculptural baseball bat weights and a Yankees baseball pendulum add game-day pizzazz, and here’s the wind-up: a cuckoo bird in his Yankees cap pops out and chirps on the hour, along with the sound of a cheering crowd. A grand slam for any MLB® fan and a baseball tribute like no other, this New York Yankees cuckoo clock is sure to excite aggressive demand, so hurry. Order now!