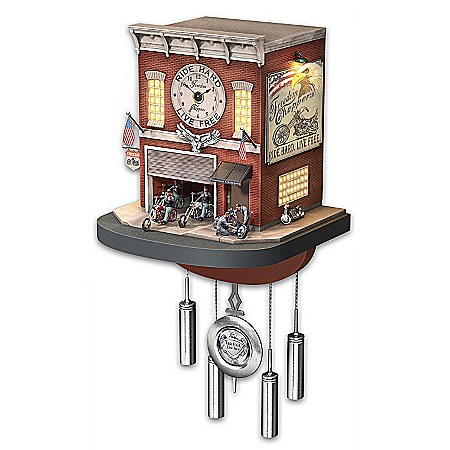 Love the rumble of an idling bike just waiting to eat up the highway? Does the smell of a leather biker jacket leave you yearning to feel the wind in your face? Then kick start every day in true biker style with the Freedom Choppers Motorcycle Garage Cuckoo Clock, available ONLY from The Bradford Exchange. Boasting an original motorcycle garage design inspired by the hottest choppers and bike shops around, this limited-edition cuckoo clock is the perfect way to make every moment a testament to the American biker’s anthem: “Ride Hard. Live Free.”Just like the sweetest rides on the road, this cuckoo clock is superbly handcrafted and customized from top to bottom. Both the clock face and the Freedom Choppers billboard bear the words, “Ride Hard. Live Free.” A bold sculptural eagle and engine hangs beneath the clock, flanked by two American flags. The garage building is filled with architectural details, from the brick-textured walls and stone-look trim, to the “Freedom Choppers” awning over the door. Even the metal pendulum is framed by hanging “piston” weights and powered by accurate quartz movement. But the real thrill comes at the top of the hour, when 3 choppers pull out of the garage, motors revving, and the cuckoo clock fills with light, spilling from every window and bathing the billboard with a golden glow. This is a custom job you have to see to believe, but strong demand is expected, so don’t wait. Order now!