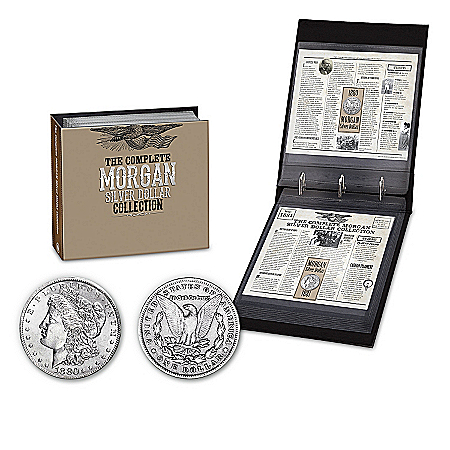 While everyone has heard of California and Alaska’s gold rush, it was the silver strike in Nevada, the fabled Comstock Lode, that brought American the “Coin of the Wild West.” So much silver was flowing out of the strike that it glutted the market, prompting Congress to turn it into coinage, the famed Morgan Silver Dollar, before it overwhelmed the economy. Now, this Morgan Silver Dollars of the Wild West Coin Collection, an exclusive presentation from The Bradford Exchange Mint, brings you an exciting Morgan Silver Dollar from each and every year of mintage, including the coveted first and last years of production, starting with Issue One, 1880 Morgan Silver Dollar. Next to arrive will be Issue Two, 1881 Morgan Silver Dollar and a FREE Album. Your collection will continue with Issue Three, 1882 Morgan Silver Dollar and additional collectible Morgan Silver Dollar Coins, each a separate issue to follow.‡The historic value of these coins is breathtaking in its scope. In 1878, mint engraver George T. Morgan created the heavy 90% silver Morgan Silver Dollar, now considered the masterpiece of the American engraver’s art. And today you can own one from every year minted, reaching back over 130 years, each permanently sealed for protection inside an informative panel detailing important happenings in the American West for that year. From treaties and Indian wars, to outlaws and cowboys, this fascinating era springs to life from every scrupulously researched and vividly designed panel. Imagine how much you will enjoy adding each panel to your FREE custom-designed Collector’s Album, and how exciting it will be to show off your collection. But very strong demand is expected; don’t risk missing out on this important coin collecting opportunity. Order now!