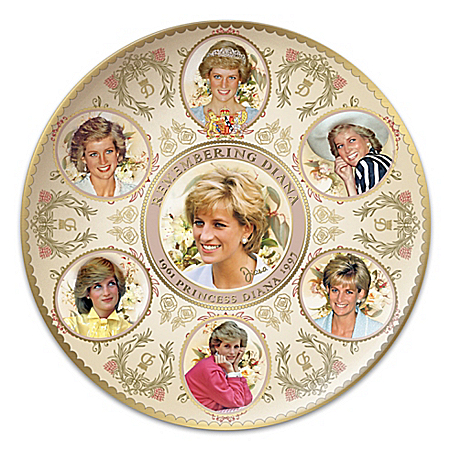 $179.99 More than 30 years ago, on July 29, 1981, a shy, nineteen-year-old kindergarten teacher married the Prince of Wales and reinvigorated the face of the British monarchy. Now, for the occasion of what would be her 55th birthday, the Celebrating Princess Diana Collector Plate commemorates her life, legacy and the ever-enduring memories of the people’s princess. Only from The Bradford Exchange, this Masterpiece Commemorative Princess Diana collector plate is the ultimate tribute to the adoring mother, fashion icon, philanthropist and queen of our hearts. Plus, it is made even more precious in that the edition is limited to 1,961 worldwide, in honor of the year of Diana’s birth!Grandly sized and masterfully crafted of lustrous Heirloom Porcelain®, this commemorative plate showcases vivid portraits of Princess Diana that have been specially acquired to create a beautiful montage. Heartwarming moments from her life are captured, including touring Australia, greeting the Argentinian public and visiting the Alice Springs School of the Air, all surround by a lovely filigree pattern inspired by beautiful roses, royal crests and Diana’s monogram. Then, adding royal touches, your collector plate gleams with 22K gold accents throughout and features a replica of Diana’s signature and a shining banner proclaiming her name and birthday anniversary. Your Celebrating Princess Diana Collector Plate even arrives in a Deluxe Presentation Case with satin-lined cushioning. Strong demand is expected for this strict limited edition, so order now!