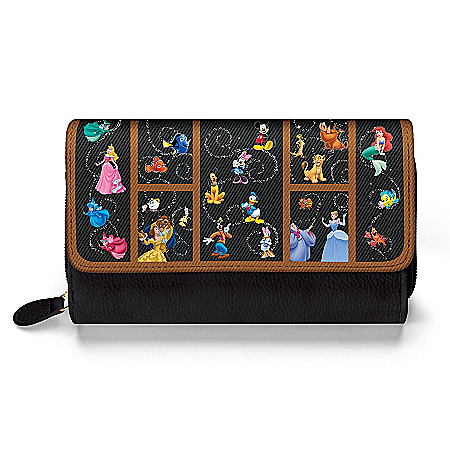 From Sleeping Beauty and Cinderella to Mickey Mouse, Dory and Simba, there’s no end to the joy Disney characters bring to their millions of fans. Now, The Bradford Exchange brings you the perfect way to take the magic of Disney along wherever you go with the Carry the Magic Disney Wallet, a stylish and functional fashion design original available from The Bradford Exchange. This designer-style trifold women’s wallet is expertly crafted of black faux leather and polyester twill and showcases your favorite Disney characters in full color against a background of swirling stars on the front flap.This functional and fashionable Disney apparel accessory features 13 credit card slots, a photo ID window and 3 different slip pockets to fit anything from change to a passport. For optimum organization, there are 2 open pockets and a zippered pocket inside the zippered compartment, along with a slip and zippered pocket on the back to securely hold bills and coins. We expect strong demand for this stylish women’s wallet, so don’t delay. Order now!This fine accessory is not intended for children. $59.95