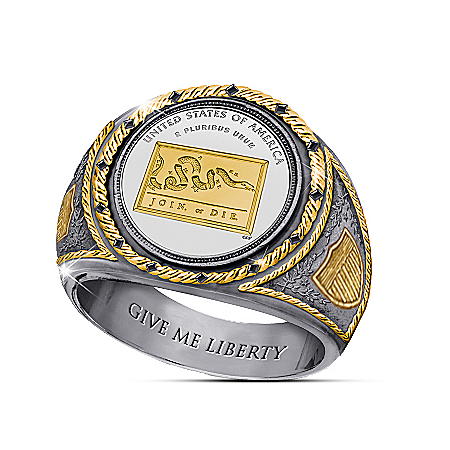 In 1754, Benjamin Franklin penned a political cartoon that would go down in history as the first-ever call for American unity. A snake, representing the colonies as they then existed, divided into sections and the motto “Join or Die.” Now this revered piece of America’s heritage inspires the Benjamin Franklin Join or Die Ring, a fine jewelry exclusive from The Bradford Exchange Mint. This Benjamin Franklin ring is finely handcrafted with a 99.9% silver centerpiece recapturing the historic Benjamin Franklin statement “Join or Die” in raised relief and plated in 24K gold.A design based on the reverse of a 2006 tribute silver dollar from the U.S. Mint honoring Benjamin Franklin’s 300th birthday, this revolutionary ring is the perfect tribute to America’s history and ideals. The “Join or Die” centerpiece is bordered by a handsome 24K gold-plated rope design with deep black enamel accents. The side shanks feature a shield and olive branch design based on historic American coins gleaming with even more 24K gold-plated highlights. Inside, the ring is engraved with the words of patriot Patrick Henry: GIVE ME LIBERTY. Strong demand is expected. Don’t wait – order now!